A new Federal law reported on in the Wall Street Journal, Bloomberg News and other publications allows for the U.S. government to deny new passports or revoke ones held by people with serious tax debts. Under this new law the State Department will block Americans with “seriously delinquent” tax debt from receiving new passports and will be allowed to rescind existing passports of people who fall into that category. The list of affected taxpayers will be compiled by the Internal Revenue Service (IRS) using a threshold of $50,000 of unpaid federal taxes, including penalties and interest, which would be adjusted for inflation.
Filing to the Internal Revenue Service from overseas is more confusing, complicated, and expensive than it is for Americans at home. Unlike almost every other country in the world, the U.S. demands its Expatriate citizens pay taxes on all foreign income. Expats must file even if they have lived and worked abroad for decades, and even if they’re already paying hefty taxes to the countries where they reside. 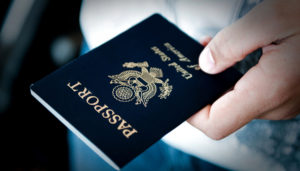 Now it’s getting worse. In an effort to fight tax evasion, the IRS recently began forcing expatriates to report not just their income, but additional information on savings and investments—rules that have made it harder to open bank and brokerage accounts overseas. More ominously, the IRS and the State Department are also implementing a provision approved by Congress in December that could revoke the passports of Americans who owe too much–raising the prospect of being stranded abroad on account of poor arithmetic.
In most cases, the passport provision would apply if a taxpayer is subject to a lien, which advises creditors of a debt to the IRS, or a levy, which gives the IRS the authority to seize assets. It wouldn’t apply if a taxpayer is in the process of resolving tax debt with the IRS, such as by paying it on an installment plan, or if the taxpayer is contesting the collection either administratively or in court, said David Kautter, a partner at the accounting firm RSM in Washington.
“Americans abroad need their passports for many routine activities of daily life, such as banking, registering in a hotel, or registering a child for school, and mistakes could be disastrous,” said Charles Bruce, an American lawyer with Bonnard Lawson in Lausanne, Switzerland, who advises American Citizens Abroad, an expatriate group.
It’s no secret that expatriate taxes are confusing and a big hassle to expats. Expatriate Tax Returns makes this entire process easier. Don’t allow yourself to error on your expat taxes, which now has even more serious repercussions like losing your passport. Call one of our tax professionals today at (877) 382-9123 to get the process started.