Living and working overseas as an American expat comes with a unique tax filing position. It can often be complicated and full of hassle. Most tax advisers and tax return preparers are not experienced in the specific nature of expatriate tax returns. The expatriate tax professionals at Expatriate Tax Returns make up a stellar team of CPAs who have decades of experience in expat tax preparation. We’ve compiled some noteworthy updates that expats will be interested in for the coming year.

The past several years were relatively quiet in terms of changes to U.S. tax law in general and expatriate tax law in particular. With a new Administration and a new Congress, there are likely to be a number of substantial tax changes that expats should be aware of as we continue on in this new year. 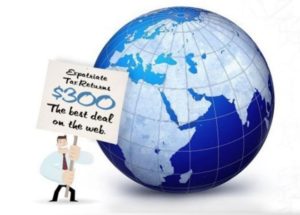 In past years, the Foreign Bank and Financial Accounts (FBAR) was due by June 30th and extensions were not allowed. For tax year 2016 and forward, however, the FBAR due date is April 15th. There will also be a maximum extension for a 6-month period ending on October 15th. That should be a good development for American expats as it syncs the FBAR due date with the tax return due date. Plus it provides expatriates more time to prepare their information and file both items at the same time.

If you live outside the U.S. on April 17, 2017, you are entitled to an automatic extension (without the filing of an extension form) until June 15. However, if you owe tax, the extension applies only to the tax return filing and not the tax payment.  Therefore, you must still submit your payment by April 17 to avoid paying interest on your late payment (late payment penalties do not commence until June 15th).

Further, under a new law, timing limitations were added for claiming the child tax credit by providing that a taxpayer identification number (an ITIN or SSN) can be used to claim the credit only if it was issued (not applied for) on or before the due date of the return. Finally, the past year was an important one in the U.S. government’s implementation of FATCA. Digital information exchanges began between the U.S. and its partner countries, and the IRS, in turn, has received more and more foreign account information. Many of the FATCA partner countries and their foreign financial institutions (e.g., banks) have made substantial efforts to become FATCA compliant in order to avoid potentially devastating penalties for foreign institutions with significant portfolios of U.S. investments. In this regard, the U.S. government gave a December 31 deadline for countries to implement FATCA locally or lose FATCA-compliant status.

It remains to be seen what tax changes the Trump Administration will make and we will keep you posted. Right now, it’s a wait and see attitude for these changes to the tax code in general and the expatriate tax code in particular.

Please don’t hesitate to call on us at ExpatriateTaxReturns.com to take the hassle out of your expat tax preparations. Our experience is your best friend! Call us today at 877-382-9123.

We install alarms and surveillance cameras in the name of security. On our computers we have passwords to protect our data and keep it secure. We buy health insurance and life insurance to keep us (and our loved ones) feeling secure. Entire professions focus on security — everyone from the security guard at the local mall, office building and sporting venue to the private bodyguard.

We even talk about security when we want to feel safe in our bed with the blanket wrapped snuggly around us. There are ways that we can feel even more secure than we currently do. As children, that might have come from a tight, reassuring hug from a parent or a reminder that we’ll always be protected. As adults, however, we know that we’re not always secure. We’re not always secure in our choices when it comes to very important matters.

When you’re an American and you’re living in a foreign country, there are certainly times of uncertainty. Filing your U.S. tax returns shouldn’t be one of those uncertain times. Expatriate Tax Returns was founded for the purpose of helping expats feel secure when it came time to file their tax returns in the United States. Your tax filing is important business and you have a serious responsibility to comply with United States tax code for expatriates each year.

Putting that task in the skillful hands of the experts will leave you feeling secure. And that sense of security is a good feeling to have.

Visit the www.expatriatetaxreturns.com homepage and click the “START NOW” button. We’ll handle the rest and let you get back to business as usual.